What's a Goal Worth?

Most of these statistical endeavours start off with a simple question.

When I asked myself "Who has the most dangerous shot in the NHL?" I came up with the Shots Taken per Goal and Shots On-Net % statistics (taking into factor missed shots, which the NHL's Shooting % does not).
Today I wondered simply, "What is a goal worth?"
The answer I came up with, about .386 points in the standings.
Methodology:
While with shots we determine their value based on scoring goals, when it comes to scoring goals we obviously have to determine their value based on winning games.
This is further complicated, as so many NHL stats are, with the fact winning percentage is pointless when teams accumulate points in overtime or shootout losses. So instead of using W% we'll use Pts/GP.
Using an individual game the idea goes like this: If a team scores 4 goals in a win, they pick up 2 points, so each goal was worth .5 points. A 3 goal effort that results in an overtime loss would mean each goal was worth .333 points.
If a team loses in regulation, no matter how many goals they score, each is worth 0 points.
Taking the 645 games that have been played so far this season (through January 12th), I took each individual team game performance and grouped them based on goals scored. And then I looked at the record of each goal group to determine the value of the goals based on points in the standings.
Based on the results I created a weighted average to come to the result. 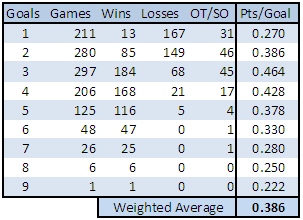 And there you have it, a goal is worth .386 points.
Evaluation:
Just for funsies, lets throw that value into the current standings to see, based on teams Goals For, how the expected point production matches up with their actual point total. 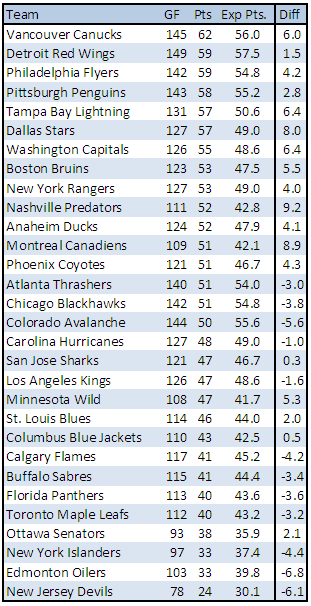 It's obviously flawed to use only one statistic to predict a points total when some teams value goals more than others.
Take for instance the Montreal Canadiens, who have the lowest Total Goals per Game in the league at  4.86. Because they play in tighter scoring games their goals have more value than the .386 number, so the expected points undervalues them.
On the other side, the Colorado Avalanche, who have the highest TG/G with 6.5, are overvalued.
Yet, overall the number works pretty well, if only to put an approximated value on a goal to say something like - By adding Nathan Horton to their line-up the Boston Bruins have added (12 goals x .386) 4.6 points in the standings so far this season.
And when combined with finding the value of other stats, like a hit, face-off win, blocked shot, or a goal allowed, could create a better statistical method for evaluating individual players.

Also, since you sat through all that convoluted wringing of numbers, here is a video of a mob of people doing the Hammer dance in a clothing store.

If you think I screwed this up, or if you think there is a better method to go about determining a goal's value, than make sure to tell me in either the comments or through e-mail: JustinRMegahan@gmail.com
at Thursday, January 13, 2011